Home > Tech News > Apple suppliers are affected by the resumption of work, and the production capacity of iPhone 11 series is insufficient.

Apple suppliers are affected by the resumption of work, and the production capacity of iPhone 11 series is insufficient.

[PConline News] famous Apple analyst Guo Mingyi released a report saying that due to the impact of the coronavirus, iPhone manufacturer Foxconn's resumption of work at its domestic factories has been affected.

In the report, the Zhengzhou Foxconn plant is the main production line of Apple iPhone 11, which is mainly responsible for the assembly of iPhone 11 and iPhone 11 Pro products. At present, Foxconn will resume production on February 10, and the recovery rate is expected to be as early as 40% to 60%. Due to lack of production capacity, Foxconn has transferred some related production work to India and Taiwan.

In addition to Foxconn, another Apple supplier, Heshuo, whose production line is mainly located in Kunshan, is responsible for the production and development of the 2020 iPhone production line for iPhone 11. Also because of the epidemic and the wave of resignation, the rate of return to work in February was about 70%. The domestic iPhone supplier mainly produces iPhone 11core iPhone 11, which was officially released on September 11, 2019, Beijing time, and on September 20, 2019.

The biggest feature of iPhone 11 is that it inherits the classic iPhone XR bangs, the classic frame design. At first glance, it is almost no different from the previous generation. On the screen side, iPhone 11 also continues the screen they were extremely proud of last year-the Liquid Retina HD LCD screen, which is 6.1in in size and keeps its resolution at the 1792x828 level (commonly known as 720P+). The PPI value remains good, and 326 still gives users a retina-level experience.

In the current environment, although this resolution is not delicate today, it is basically enough as a mobile phone for daily use. In addition, DC dimming along with LCD can give sensitive users who don't like OLED some additional options. LCD will never be a slave, the LCD screen of iPhone 11 is no less than some OLED screens, it supports P3 wide color gamut display, and the maximum brightness of 625 nits ensures visibility in the sun.

In the bangs section, the Face ID with 3D structured light facial recognition function in iPhone 11 has an excellent unlocking experience and high security performance, so we continue to welcome the bangs on Apple iPhone 11, of course, it will be even better if we can do the corresponding components under the screen in the future.

On the back of the fuselage, the most obvious change is the iPhone 11, a rear camera module, which has been upgraded to include an ultra-wide-angle lens to accommodate more images during shooting. The camera module is wrapped in a rounded rectangle, which is the "bathroom warmer light" design ridiculed by the outside world.

The back of iPhone 11 is mainly made of glass. According to Apple, the glass on the front and rear of iPhone 11 is by far the strongest in the iPhone. It is believed that there has been some improvement in fall resistance and wear resistance. Interestingly, the iPhone 11 is slightly different from its big brother Pro series in the back design. Most of the glass on the back of the Pro series is frosted, and the lens part uses smooth glass, while iPhone 11 is on the contrary, using smooth glossy glass on most of the glass and frosted glass in the lens part, which makes a slight difference in the feel.

As for taking pictures, everyone must have a good idea. To sum up, the old driver summed up the four words "truth lies in truth". Restoring reality has always been the principle of Apple in taking pictures, and Apple has been using Android to play with the remaining levels of pixels, as well as the top-level algorithm adjustment of its own imaging team, so that each generation of iPhone can have a fairly high level of photography. In addition, the newly added wide-angle mode has a good overall performance, a wider field of vision and a stronger depth of the picture. In normal mode, iPhone 11 will automatically detect the images you shoot. If there is a situation suitable for wide-angle mode, the phone will display wide-angle pictures on both sides, providing you with a better choice.

In terms of performance, iPhone 11 is equipped with the A13 processor released by Apple this year. The A13 bionic chip has two performance cores and four customized energy efficiency cores. Compared with the energy efficiency core of the A12 bionic chip, the speed can be increased by up to 20%, and the energy consumption can be reduced by up to 40%. Also because its performance is much better than that of the A12, the iPhone 11 takes an hour longer than the iPhone XR in terms of battery life.

IPhone 11 factory pre-installed iOS 13, its 3 overall UI design style has not changed much compared with before, to put it bluntly, there is no change. Of course, excessive animation and fluency are still at the top level, and Android is hard to match. Although the overall UI hasn't changed much, iOS 13 has changed a lot in some details. 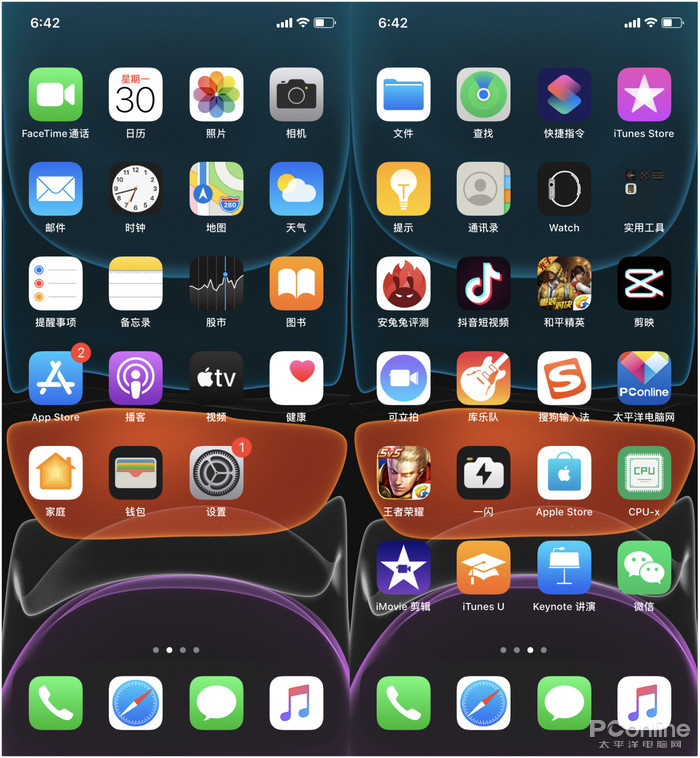 In addition, the battery health page has also been redesigned. In addition, battery health also adds optimized battery features, iPhone will learn the daily charging mode, and suspend charging to more than 80%, slowing the aging of the battery. IPhone 11 supports PD fast charging, but the paired charging adapter only supports 5V amp 1A. If you want to charge quickly, you need to purchase an additional PD fast charging adapter and data cable.