It is believed that many players will experience the new technology of ray tracing when playing the game, but due to the constraints of the graphics card, it is not smooth to play the game., RTX SUPER graphics card light chase "core" upgrade, so that you have a more perfect light pursuit game experience. RTX SUPER series graphics cards use the new NVIDIA Turing architecture, the performance is more powerful than the previous graphics cards, and the ray tracing technology has been further improved, so that players have a more real game experience. Gengsheng has always been famous in the industry for its excellent overclocking features, this time it will lead players to open the door to the era of ray tracing games. 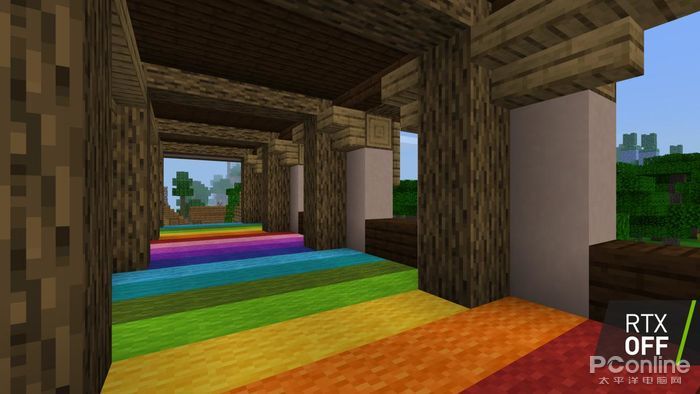 After turning on the ray tracing technology,《My World》will bring players a new experience and feel the reality of light and shadow. With the addition of ray tracing technology, almost all visual elements have been sublimated, and the lights of real-time global illumination in the game change with the change of the surrounding environment. The theme of the game is that players are free to create and destroy different kinds of squares in three-dimensional space. In the game, players can complete the main line of the game by destroying or creating exquisite buildings and art in single-player or multiplayer mode, or collecting objects to explore maps.

《 Sword net 3 》is the world's first VulKan light-chasing game that supports NVIDIA RTX. The new version of  《 Sword net 3 》supports caustic effect based on RTX ray tracing, through real physical simulation, real-time mapping with objects such as hull and stone wall, to provide a more real "water light" effect of diffuse refraction. Under the blessing of RTX SUPER graphics card, you can feel the flow of light on the water surface, the crystal clear of diamonds, and the majestic momentum of Taiyi Shrine and the magnificent scenery of high mountains and flowing waters.

《Control》 is a new work by Quantum Breaking studio Remedy. This work can be regarded as the spiritual sequel of Quantum Breaking. In the game, players can use their minds to control objects. The main scene of the game takes place in the control bureau of the federal government of the United States, a large and constantly changing building. The simple background of the game is that the control bureau has been corrupted by supernatural forces, and the heroine Jesse Fadden, played by the player, needs to investigate this strange event. The ability to turn on ray tracing control has been greatly improved in terms of picture quality, and players seem to enjoy every event triggered by the protagonist.

《 Battlefield 5 》 is a first-person shooter produced and released by EA as an orthodox sequel to Battlefield. The multiplayer mode of this film adds a number of character animation like a movie blockbuster, players are surprised at the battlefield, but also have to beware of the attack of the enemy behind, shocking picture quality plus character animation, comparable to the movie blockbuster. After turning on ray tracing to enter the game, you can obviously see the difference on the drawing paper, delicate and exquisite but real again. With the blessing of ray tracing, please climb a tall building again, and the reflection on the water surface is lifelike. There is no stiff light and shadow of those games before.

Gainward RTX SUPER series graphics cards, whether in theoretical performance tests, actual game tests, or solid product workmanship, are in line with the positioning of its mainstream gamers, and are definitely worth getting. They have a very high performance-to-price ratio in the current graphics card market. Its emergence not only solves the pursuit of higher performance by the majority of players, but also promotes the development of ray tracing games. It is believed that there will be more games to support ray tracing technology in the future, and such graphics cards are also an essential part.

Prev article:Huawei Mate30 5G is the first choice for Chinese Apple users to change their phones

Next article:Qualcomm started a price war ahead of time, MediaTek's 5G chip was most affected